I will start with the disclaimer again: I’m not a doctor. Don’t listen to me. If reading these articles got your interest on keto diet, please discuss with your doctor.

After my last post I’ve got quite a few questions and the majority seem to revolve around what to eat while on keto. So let’s get to it:

-Oh, no! I can’t live without mac and cheese, pizza, corn flakes, milk, candy, pasta, sweets, etc. Please, PLEASE tell me how I can eat everything I want and still check the keto box!

Nope. Now here is a thing your brain is not telling you: You have an enormous ability to adapt to new environment and routines. You can get used to a completely different life and no, you won’t die or even suffer because you are not eating a bunch of stuff that you think are necessary for your happiness. So remind yourself all the time about it, because at first this will be your brain trying to get the instant gratification it got used to.

Cut the crap and tell me what I can eat

First rule: If it looks industrialized, refined, processed or anything that your ancestors from thousands of years ago wouldn’t be able to eat, then don’t eat it.

Now you are rolling your eyes and thinking I’m some sort of anti-technology hippie who wants to convince you into a stupid kumbaya lifestyle where all comforts of modern life are bad for you.

Nope, that’s not me. I own a goddamn robot lawnmower so trust me, I’m all for high tech, science, medicine and all that stuff. And yay, vaccines, they are awesome! That’s exactly why I’m telling you to stay away from refined food.

Here’s the thing: Your body is built out of what you eat. You are literally what you eat. That is used to build your cells, their membranes and everything that makes… you. Now, when you replace what you can find in the nature, the thing for which your body has adapted for thousands of years with some “cheezyos: just like cheese but made of tasty Styrofoam”, that stuff will be used to build and maintain your body. Imagine you are going to replace the roof of your house, but as you run out of the right material, you use Lego bricks.  Sure, you can “build” the roof, but it won’t handle weather and damage the same way. It won’t insulate temperature, hold the rain and will likely decay much quicker.

That’s kind of exactly what will happen to your cells: As you eat processed fats, things like the membrane of those cells will be affected in a similar way. By eating processed fat, for example, these membranes may become less permeable. It now can’t bring nutrients into the cell or reject waste. You won’t have any visible symptoms immediately, but over time they add up. Every one of those Lego bricks being added up to your roof will eventually become a larger problem. Think of nearly every degenerative disease: Yes, neurodegenerative diseases also count, including Alzheimer’s.

So even “healthier” foods, that promise to remove all the carbs and give you just the great proteins and fat… as a nice little powder with a bunch of ingredient names you have never seen before… Well, careful there.

Second rule: Stay away from carbs. Anything made of flour, all breads, pasta, cereals and so on. Two reasons for that: First, they tend to be processed foods and second, they have a hell lot of carbs. But not just that, they are digested too easily and quickly, which means your body will inevitably release insulin to cope with that, which leads to insulin resistance, which brings us back to all that stuff I discussed in the previous post.

Third rule: Count carbs. In the beginning, counting carbs will be your survival tool. You won’t know which foods are high on carbs and which ones aren’t, you will ask yourself a thousand times a day “can I eat this?” and “how many carbs did I have today so far?”. There’s an app for that! On iOS, the Carb Manager is my favorite. I was about to say they don’t have it for Android but slap me, apparently they do!. Even if you don’t care about logging a diet but just want to check before eating something, that helps. Using that app at first will be an endless discovery of stuff you didn’t know, like 1oz of popcorn alone having 24g of carbs. And no, you don’t need an entire goddamn bucket of popcorn that is so big you could live inside of it. A lot of what makes keto work has little to do with what you eat but how much of that you are eating.

Fourth rule: No fruit juices. Yeah I know they taste great but they have a hell of sugar, and no fiber. Your body has to work very little to bring all of that to your blood, quickly. No, they aren’t “healthy”. In fact, if you really feel you need the “health” of fruits, at minimum eat them instead of drinking. And still, you could argue that eating the kind of fruits we eat today in that quantity is one of those things your ancestors just didn’t have the luxury to enjoy, so don’t.

I’m about to hang myself, what’s left??

Ok so we want to focus a lot on healthy fat. And no, not all fat is healthy. My order of preference (that’s jut me, no particular order there for you):

Those are just some examples. There are many more. Careful with the oils, notice I did not mention things like sunflower oils because you can’t just cold press them into oils, you have to use a hell lot of processing which brings us back to the first rule.

Now on the protein side, there’s plenty of good stuff:

All the good stuff. Notice I kept milk out. Milk is not a friend of keto. Yes, that means no lattes and that sucks. I still have lattes and you can use almond milk (Unsweetened! If you’re drinking sweetened almond milk you’re drinking a milk that both tastes like crap and doesn’t help your health either) and a bunch of other alternatives and no, they don’t taste the same and yes, that still sucks.

But you know what? Cheese is totally cool! You can also try heavy whipping cream on the coffee.

Beyond all the above, you can also have nuts that have fat but are relatively low on carbs, like pecans. But avoid cashews and pistachios (too many carbs).

Let’s be honest: Most of you came here to find out some magic list of amazing food substitutes that will make your life exactly the same, but keto. Ain’t going to happen, but so you don’t go away disappointed, let’s talk about some things you may want to consider to make the experience less miserable:

“But you just told me to stay away from food that doesn’t look like what our ancestors used to eat!”

My answer to that is: Yes.

Does this bread taste like bread? Ha, not really. But if you need something to spread low carb cream chesse or make a low carb sandwich, this will do.

But what do you do when you travel??

There are a few things you can do when travelling and trying to keep yourself on keto.

One very easy thing is just not eating at all. Radical, yes. But I’ve done it and know others who have too. If you are keto adapted and not travelling for too long, it’s manageable.

The other trick, this one I’ve learned from Dom D’Agostino, is to pack some cans of sardine in your bag. Sardine is a great solution when you just need to feed yourself and keep into the keto. During my last motorcycle trip around Canada, I had this breakfast: 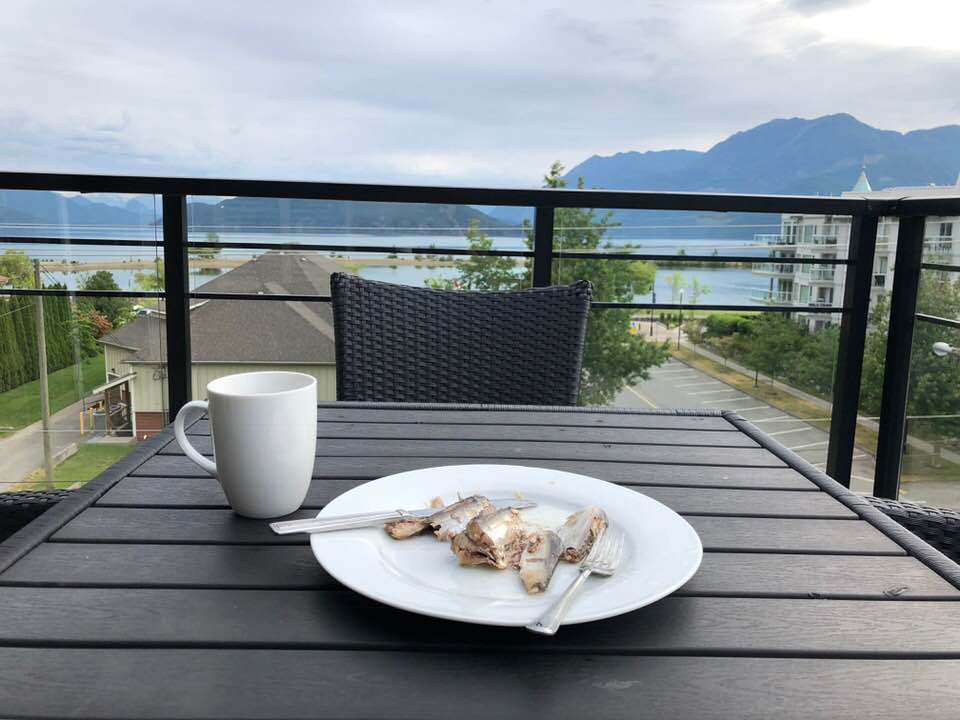 Yes, these are sardines and coffee. I also had this dinner: 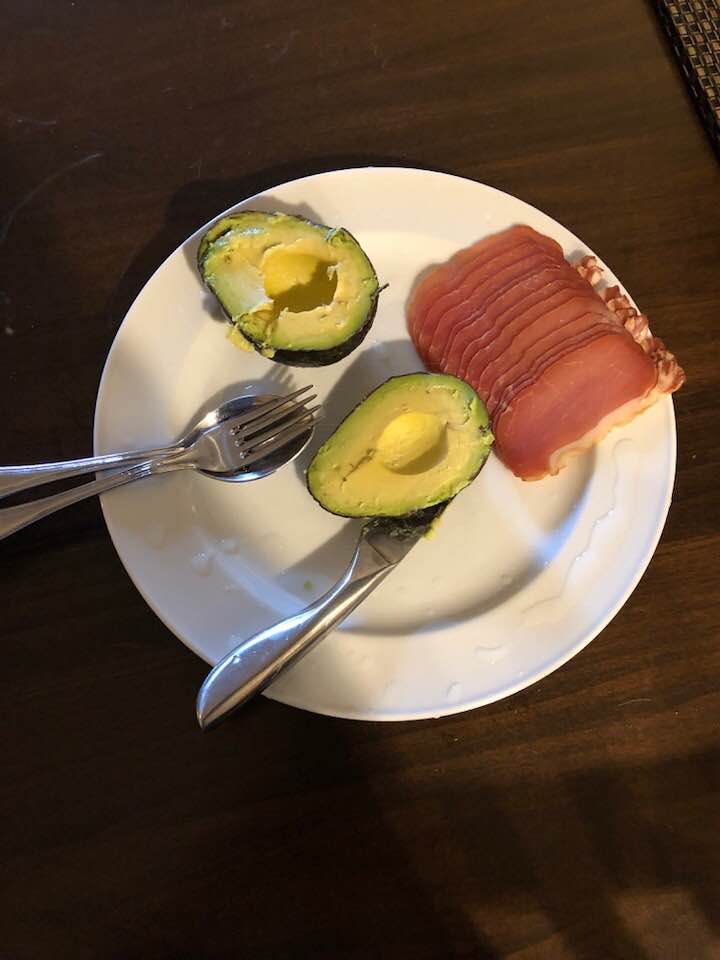 So improvising isn’t a huge deal.

Did I miss anything? Any other tips for the people doing keto?